Rome Italy in a Day 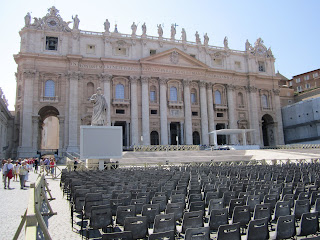 Giovanni drove us to Rome and around Rome. What a great tour guide he was (and good looking too). The ride from the port was a little over an hour. This was Republic Day in Italy which is similar to our 4th of July. Large crowds were everywhere and because of a parade Giovanni had to change his course. We saw so many sights I don't think I can remember them all. He took us to where Julius Caesar had been killed. Just think how many years ago that was! The ruins were right downtown and not marked. We also went to the Pantheon and then met up with Marco who walked us through the Vatican (we saw where the pope addresses the people in above picture) and Sistine Chapel. Michaelangelo was commissioned to decorate the ceiling of the Sistine Chapel with scenes from the creation of the world as well as prophets and biblical heroes. The work took 3 years to complete. Twenty years later he was again commissioned (I don't think he could tell the pope no) to add another fresco on a wall behind the alter called the Last Judgment. Michaelangelo's own face appears in the skin of St. Bartholomew. Very impressive!

Giovanni took us to an Italian restaurant for lunch where he seemed to know the owner. We started with a selection of about 5 different antipasto (appetizers) and then we had 2 pastas - a meat filled tortellini and the most delicious lasagna I have ever eaten. The pasta and cheese were so creamy it just melted in your mouth.I will always remember Rome for that lasagne. 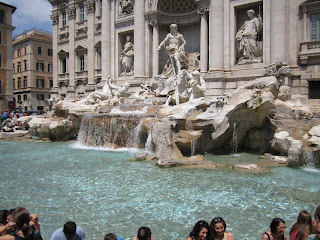 At the Trevi Fountain I threw in a coin because as the legend goes "if you throw in a coin you will come back to Rome". We ended our 8 hr. tour with a visit to the Colosseum where the gladiators fought and early Christians were thrown to the lions. We could see below the arena floor where the animals had been kept. 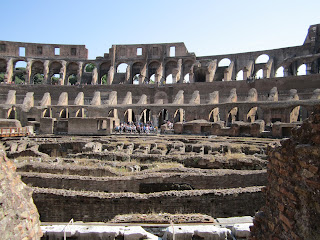 By having a driver meet us at the ship and drive us around I feel we saw so much more than if we had tried to see it all on our own since we didn't know our way around. And because there were only 8 of us it was so much easier then being on a bus with 50 others and it cost less than the ship's tour too. We had a good overview of Rome although it would be nice to have more time here.

I tried my best to sample as much gelato in Italy as I could and our ship also had gelato for sale. Gelato is very similar to ice cream but creamier. Today I had 3 scoops - strawberry, eggnog and limoncello. All were delicious! I believe eating the local food is part of the experience.

Next time I will write about our trip to Pompeii and down the Amalfi coast. Stay tuned!
Posted by Becki at 12:00 PM No comments:

The Region of Tuscany

We disembarked our ship at 8 am and met Luis who drove us to Florence. Luis spoke some English but not alot, which was alright since he was our driver and not our tour guide. As he was driving us to the city we discovered he did know two words in English very well - "Stupid driver!" Along the way we saw alot of terra cotta houses and olive trees.

We met our tour guide, Isabella, who took us on a 2 hour walking tour of Florence. She spoke excellent English and was very pleasant. Florence is known as the Renaissance City and everywhere we turned there was a famous statue or beautiful building. We saw the Cathedral or Duomo which is covered in multi colored marble. Outside the Duomo is the Bell Tower and the Baptistery which was decorated with white and green marble. 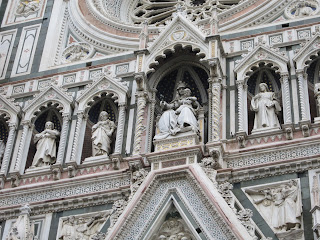 Although we did not go inside the Uffizi Gallery it is one of the world's most famous museums where you can find works of nearly every Renaissance master.  The Academia is nearby where you can find Michelangelo's David. The original is inside and there is a replica outside.  Not far is the Ponte Vecchio a 14th century bridge. Long ago goldsmiths and silversmiths built their shops on the bridge. We also went into a 14th century church where the walls are lined with many tombs including Galileo, Michelango and Rossini. 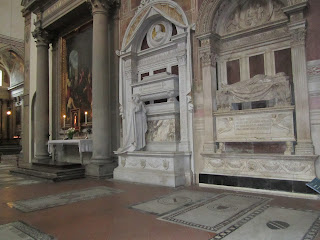 After our tour we stopped for some gelato and met our driver to take us to Pisa. There are three main buildings here, the Cathedral, Baptistry and the Bell Tower which is the famous Leaning Tower. Galileo was a native of Pisa and used the Cathedral to study the movement of the pendulum and the Leaning Tower to work out his laws of gravity and acceleration. It is now leaning 14 ft. to one side due to the settling of the subsoil. It was fun to watch the many people trying to get a picture of themselves holding up the tower by holding the camera just right. 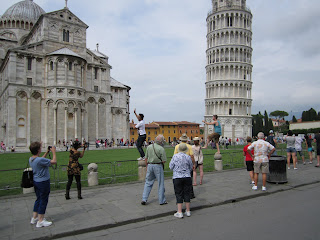 Luis then drove us the 20 minutes to our ship where we embarked just in time for dinner.
Tomorrow is a very full day of sightseeing in Rome! 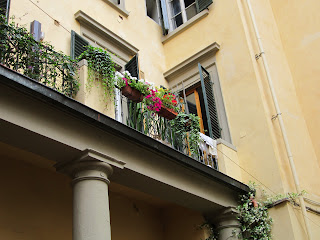 Can you find the cat in this picture?
Posted by Becki at 5:16 PM No comments:

Our first port on this cruise and what a beautiful city! We cruised 281 miles last night. This is the way to travel. The ship is like a floating hotel. We get to see all these wonderful places and we have to unpack only once.

We arrived in Monte Carlo only a couple of days after the Grand Prix. The bleachers were being taken down while we were here and there were still many yachts in the marina as I am sure many of the people that came for the race stayed for a few days after. There is really not much parking available so the best way to come here is by water. As you may know the race is run on the streets which is really amazing since the streets have many curves and hills. I am sure that must have been something to see and when they have the race next year I will be watching it on TV.

We hopped on one of the city busses to get a glimpse of the city and also so we wouldn't have to walk uphill to the Prince's Palace and St. Nicholas Cathedral. The palace is where the prince lives and was built as a fortress in 1191. The changing of the guard was just ending when we got there. The cathedral is where Princess Grace and Prince Ranier were married and where they are now buried. This area overlooks some beautiful harbors and cliffside gardens. We saw many lemon trees full of fruit. A picture does not do it justice.

We proceeded to do a little shopping in a few of the little shops - bought some olive oil soap and nice kitchen towels with "Monaco" embroidered on them to take home. I was looking for things that were small and lightweight due to the weight limit on luggage.We did not make it to the Oceanographic museum but I understand it is very interesting. Jacques Cousteau was the director here for many years.

Tomorrow we will be in Italy for the next 3 days. It is everything I have heard about it and more.
Posted by Becki at 7:11 PM No comments:

Reflections from my Mediterranean Cruise - June 2012 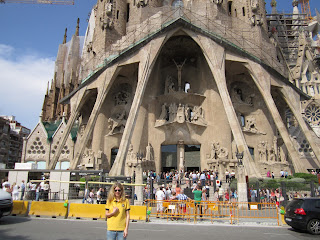 I am so excited to share with you about my recent trip to Spain, Greece, Turkey and Italy. Our group of 8 people took this "once-in-a-lifetime" cruise and thoroughly enjoyed it! We were a group of all people in our 60"s and we have all cruised before. In fact, this was my 15th cruise but my first to this area of the world.

We started our 2 week adventure in Barcelona, Spain where we stayed for one night. This was not enough time so if you plan to do it yourself I would recommend 3 nights here and stay on or near Las Ramblas which is a major street which offers much entertainment such as street mimes etc. 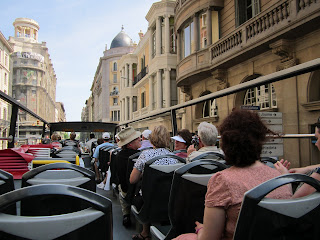 We got our tickets for the hop-on hop-off bus which goes to all the major sights. The entire city has the most interesting architecture thanks to a man named Gaudi. The above picture is of La Sagrada Familia which is a church started by Gaudi in 1883 and construction is still ongoing. Many of the other buildings in Barcelona have Gaudi's influence also.

This is a busy, exciting metropolitan city but very clean and many people live downtown in apartments above the stores. There are many yellow and black taxi's which look like bumblebees on the streets. They only hold 4 people so if more people are in your party you will have to divide up to get to your hotel or wherever you are going.

We then boarded our ship for the 12 night cruise. We had no idea what exciting sights we would see!

Stay tuned for our first stop in the land of the rich and famous, Monte Carlo!
Posted by Becki at 12:22 PM No comments:

Christian owned and operated for over 15 years, we have experience in booking individual, couple, and group vacations and cruises. Our expertise and experience ensures every detail is taken care of.